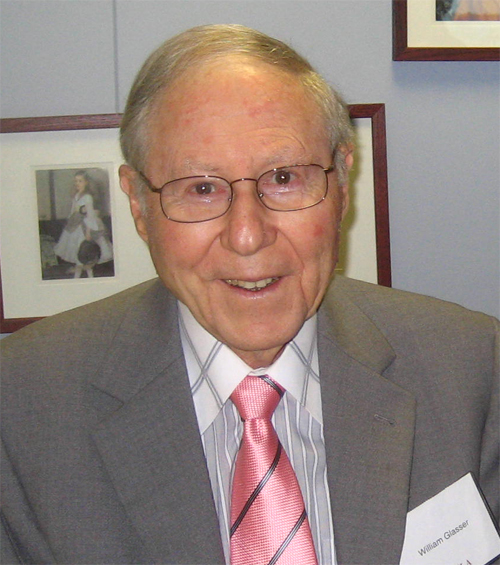 The word “genius” has never fitted Bill Glasser well – not because he wasn’t one having been well recognised as such around the world – but because he was that and so much more. Bill was a genius and a man of courage and a person of wonderful humanity.

As a young man he had wandered through academia looking for a niche for himself. He had studied engineering and psychology and medicine and then, still restless, talked his way into psychiatry. As he started out on this hard-won career he could easily have settled back on his academic laurels and spent a long professional life as a talented psychiatrist. But one thing stood in the way and that one thing was Bill Glasser’s extraordinary appreciation of common sense and his staunch commitment to it.

Stephen Covey once described a leader as someone who climbs the tallest tree in the jungle, has a look around and then shouts back down to his followers, “wrong jungle”. Bill Glasser was such a leader and it cost him dearly in the beginning. He has spent a long time on the fringe of his profession describing serious personal distress in terms of very human attempts to meet basic needs. Where there was no evidence of pathology, there was no pathology.

His rapidly spreading fame as an effective therapist was built on a practice where no medication was ever issued. After the publication of his seminal work, Reality Therapy in 1965, his ideas gradually spread throughout North America and then around the world crossing political and religious divides with unusual ease. We sometimes joke that the only place his ideas are not taught is Antarctica … and we add, “not yet!”

Bill Glasser never stopped trying to improve his ideas and this search led to his creation of “Choice Theory Psychology” in the last decade of the twentieth century. This was a new psychology of personal freedom that, on the one hand, gives clear pointers about the path to mental health and happiness and, on the other hand, highlights the destructive power of any psychology based on external control.

Eventually fellow professionals began to recognise Dr. Glasser. In 1989 the Milton Erickson Foundation’s Evolution of Psychotherapy Conference admitted him as a member of the distinguished faculty of Pioneers in Psychology. In 2004 the American Counselling Association honoured him as a Legend in Counselling. In 2005 the American Psychotherapy Association awarded him the prestigious Master Therapist designation. He has been the recipient of a number of honorary degrees and fellowships. His long-held challenge to the medical analysis of human distress is a view that is rapidly becoming widespread today. As recently as last May the California Senate passed a resolution to honour Dr. Glasser for “a lifetime of achievements and meritorious service to humanity”. It was so fitting that this last honour should have been in his home state and city.

Those who have had the privilege of knowing Bill Glasser on a more personal level will rarely speak of him without recalling some humorous anecdote involving him. For a man who still carried signs of the shyness of his youth he had a wonderful ability to engage others. He has always acknowledged the vital support he received from Naomi, his first wife who died in 1992, from Carleen, his wife since 1995 and Linda Harshman, the administrator of the William Glasser Institute.

At this time of bidding farewell to Bill Glasser the man, we are acutely aware of the deep personal grief of Carleen, of Bill’s children Martin (Pamela) and Alice (Jesse Thompson), of his grandchildren Jana, Nate, Julianne, Jared, Rachel, Conor, Michael, Nicholas and Scarlett, and his great grandchildren Lucy and Amelia.

We are also aware of the tears that will be shed in so many countries around the world as the news of Bill’s passing reaches them. Those tears follow the routes that Bill’s ideas followed and those tears will energise the work of spreading them even further afield.

Bill Glasser, we honour you, we thank you and we celebrate you.